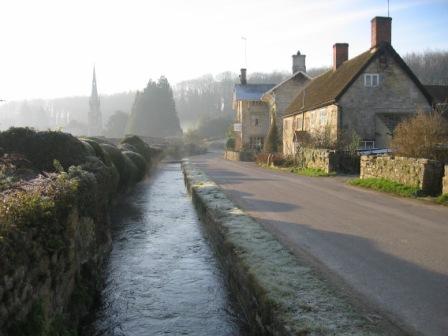 Teffont is one village but through history it has been two - Teffont Evias and Teffont Magna – the two lie close together in the lovely Nadder Valley and although adjacent have each had a completely different history both names are still used today.

The spring fed stream gushes from the ground just north of Teffont Magna known as ‘The Teff’ or 'Teffont Brook' winds its way through Teffont has attracted visitors to the area for thousands of years. Mesolithic hunters left flint arrowheads in the surrounding woodland, Neolithic farmer left their tools, and Iron Age warriors added their spearheads. Between them the Romans and Anglo-Saxons invented a name for the place: Teffont – made up fom a Frisian word for border ‘tef’ and the Roman word for spring ‘fontana’.

Teffont Evias owes its name to Harold Ewyas, son of Ralph, Earl of Hereford, who although his main estate was in Hereford, he also acquired the Manor of Teffont in the late 11th century. In the course of the next 300 years it passed largely by inheritance through a number of families. It was acquired by Christopher Mayne in 1692 and is still today owned by descendants of that family.

Teffont Magna, which was known until comparatively recently as Upper Teffont or Over Teffont, was in the 10th century granted to the Abbess of Shaftesbury, together with the Manor of Dinton. At the time of the dissolution of the monasteries it was given to William Herbert, first Earl of Pembroke. It remained a part of the Pembroke estate until 1919 when it was bought by Lord Bledislow. In 1950 it was sold by his son; it was subsequently divided into lots and bought up as separate farms.

An artist painting a picture of Teffont today is unlikely to call it ‘Peace’ as did Lamorna Birch at the turn of the century. However, even if passing traffic has made it less peaceful than it was, it remains a very picturesque village. Its residents take great pride in it. It won the ‘Best kept small village in Wiltshire’ award in 1973, 1983, 1996 and 2013.

The village is blessed with a strong sense of community, which manifests itself in many organised and voluntary activities ranging from a Village show in the summer through Garden and Wine Clubs to many Village Hall and Church activities. Good neighbourliness means that those who live on their own or who may need some occasional assistance have friends and neighbours close by to help.

Over the years a predominantly agricultural economy has given way to a mixture of home based employment, local businesses and services as well as some commuting. However, three farms are still based in Teffont and there are other employment opportunities in the village such as Manor Farm Livery and Howards House Hotel.